40,000 fans in attendance plus millions watching from their couch or local pub collectively groan. The commentators lament the score that might have been. Their team has dropped the ball.

Meanwhile, the coach is busy considering two questions: What was the failure? What feedback should they give to their player(s)?

The coach must choose a lens to evaluates the event. This choice fundamentally shapes his answer to these questions. 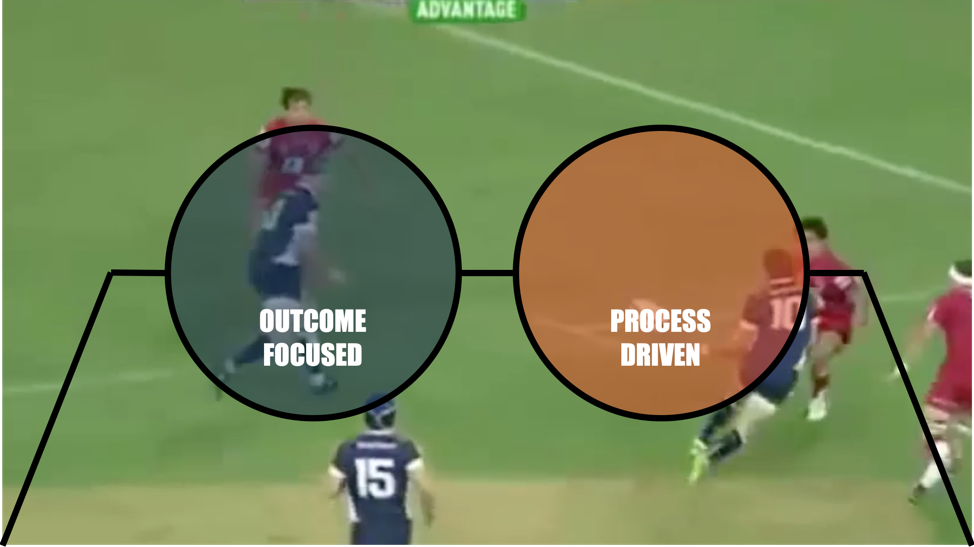 The coach looks at the outcome of the pass from Blue 10 to Blue 3. Blue 3 dropped the ball.

Given an Outcome Focused approach, what was the failure? Blue 3 dropped the ball. Now they must decide what feedback to give to the player.

The Outcome Focused analysis provides limited information and constrains the coach’s feedback. Blue 3 had two possible outcomes: drop or catch the ball. The coach – desiring the positive outcome in the future – shouts from the sideline, “Blue 3, Catch the ball!”

What are the consequences of this feedback? Has the coach empowered Blue 3 to catch the next pass? Probably not. The feedback implies that the athlete decides while the ball is in the air whether or not to catch it: on this occasion Blue 3 chose to drop but with this feedback, he will decide to catch the ball the next time. In reality, very few people choose to drop the ball. “Catch the ball!” provides no new information to help him figure out why he dropped the ball and how to improve in the future. Because he does not have adequate information to make corrections, Blue 3 is likely to repeat the negative outcome later in the game.

As Blue 3 repeatedly drops passes, he becomes increasingly frustrated. Frustration diminishes his focus. A minor issue – that initially plagued only one of his skills – now festers and brings down his entire game.

This unproductive feedback can have team-level consequences as well. “Catch the ball!” implies that Blue 3 decided to hurt his team and his peers by dropping the ball. It implies ill will on his part. It makes Blue 3 feel untrusted. Over time, people who feel they are not trusted tend to distrust others. They become hostile and negatively impact team culture.

The Process Driven coach reviews the moments preceding the drop. They search for Process failures. They come to a frame that perfectly illustrates two such failures. 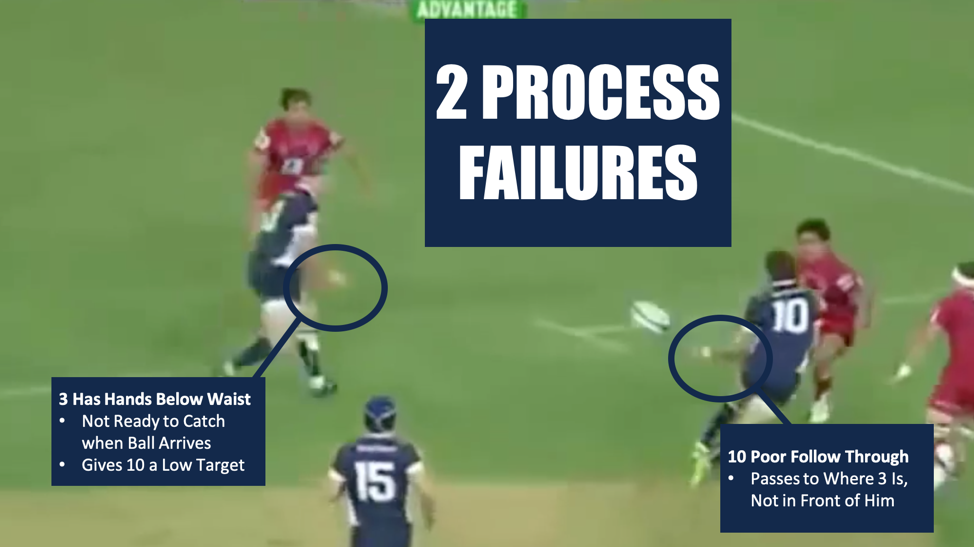 “Blue 3, Let’s get our hands up and extended towards the passer. Blue 10, make sure we’re following through to a point in front of our target.”

Does this empower the players to make improvements going forward? Most certainly. The coach's feedback informs them why the pass was dropped and given them specific fixes to prevent future drops. The likelihood of frustration decreases because they know the cause of their failure. This one mistake is now less likely to fester and negatively affect the players throughout the rest of the game.

How does Process Driven feedback affect the team’s culture and cohesion? The feedback implies trust. It assumes both players want to positively contribute to the team and offers tools to do so. By eliminating blind spots, this feedback also improves across-the-board accountability in the team. Blue 3’s morale benefits from not being singled out. Threats to cohesion – like a perception of favoritism towards Blue 10 – are avoided. Empowered by specific knowledge of how to improve, both players are now capable of addressing their deficiencies. Their teammates see their specific efforts to overcome their weaknesses. This will positively impact team culture.

The moment someone drops the ball, their leaders, colleagues, friends, and family make a split-second decision to be Outcome Focused or Process Driven. The Dropped Ball Thought Experiment suggests choosing the latter should be a no brainer. Yet intelligent, rational people regularly choose the Outcome Focused lens. Why does this happen? In short, outcomes are seductive honeypots. Proactive measures are necessary to avoid their trap.

Over this series of essays, we will examine the barriers to choosing the Process Driven lens and suggest workarounds. Look for an article on the first obstacle - the relative visibility of Outcomes and Process - in a few weeks time.

In the meantime, I would love to hear your experience with the Process-Outcome decision. Whether you are a process pro or struggle not to succumb to the outcome seductress (we've all been there!), please give me a shout on LinkedIn and share your experience!

I will also be presenting a webinar on a new staff training method grounded in a Process-Driven philosophy on 11 August as part of the Champaign County Chamber of Commerce Business Seminar Success Series. Visit the Chamber Website to learn more and sign up!

Joseph Rasmus is a Project Consultant with the L M Thomas Group. 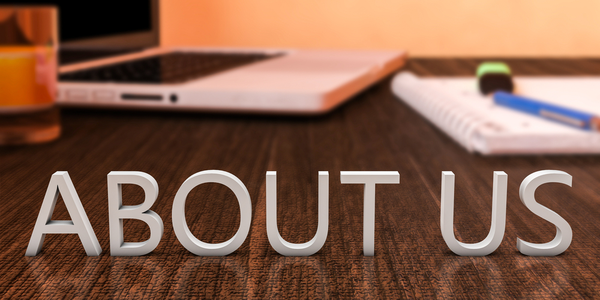 The L M Thomas Group releases organizations and their leaders to grow strategically through a full menu of business consulting services.

We want to see you thrive!

Let's Be In Touch!

Our church constitution needed a new life, but it can be hard for people to accept change. Matt Thomas helped to guide us through the weeds to a concise constitution with the basics we needed and one that our congregation was willing to pass. Thank you Matt for your obvious knowledge, clarity and caring attitude through this process.

Why is identifying adaptive change important? 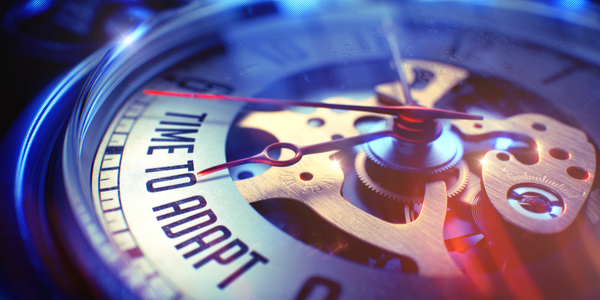 Last week, I wrote about four leadership postures for organizational change. These postures shape our leadership stance, increasing the likelihood that our change process will achieve healthy results.

The first posture of those four was change identification - knowing what type of change we were dealing with: adaptive or technical. To recap the difference between the two:

"Adaptive changes deal with habits, mindsets, and behaviors, and require organizations and their leaders to learn something new to resolve the challenges at hand. Adaptive changes often have open-ended problem definitions and solutions. Technical changes, by contrast, require application of specific skills to bring a closed-ended issue to resolution."

Putting this posture first hints at its importance. So why is identifying adaptive change important for organizational leaders?

To understand its importance, we have to look at our usual starting point. For a summary of the reasons why, skip to the end - otherwise, read on!

Where we (tend to) start

As leaders, we are trained to attack most problems as technical issues, which our expertise or an outside product will be able to resolve. Perhaps our challenge fits squarely in the middle of our deep, core expertise, something we trained for, we have degrees and certifications in, and have practiced over time. Alternatively, we may perceive the current challenge to be adjacent to our core expertise, and so we tend to apply our expertise there as well - to the degree we can.

This is how most of us were taught to solve problems: see problem, find solution. This works very well when we are working our way up through our core expertise - whether deepening it, broadening it, or both. This works particularly well in fields where the same problems come up over and over again, and the application of technique, product, or knowledge is tried and proven suitable.

The problem comes when we find ourselves in our first leadership position where our core expertise is only a part of what we do. All of a sudden, the "Hello, Problem; meet Solution" approach doesn't work in all those other areas.